It’s pretty fun to do the fetch game with your dog, and what better thing to throw than a tennis ball, right? Well, just imagine the toxins in a typical tennis ball and it doesn’t take long to speculate on some of the things that can go wrong. Here are a few: 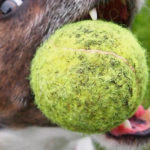 In 2007, an Illinois dog owner hired a laboratory to test the lead content in 24 of her Shelties’ chew toys. The tests revealed that one of her dogs’ tennis balls contained 335.7 parts per million (ppm) of lead, an amount that, at the time, fell far below the levels allowed in children’s toys. Today, however, that amount exceeds the 300 ppm federal standard for lead in children’s toys. The lead could be the culprit on top of whatever possibly toxic chemicals remain in the tennis ball core.

The bottom line is, OWNERS, PLEASE LOOK FOR SOMETHING NON-TOXIC TO PLAY FETCH WITH. TENNIS BALLS ARE MAKING YOUR DOGS SICK!!!

One last suggestion… if your dog does get any form of cancer and you catch it early, we have heard miraculous reports of TURMERIC GOLDEN PASTE turning the cancer around in dogs. At the end of this article is a great recipe for making it yourself. Good luck!